All sports clubs at the University of Oxford welcome enquiries from those with a disability regarding the accessibility of that sport. Some opportunities are open to more than just Oxford students with members of staff at the university, students and staff from our neighbours Oxford Brookes University, and local community members also welcome to join.

By working in partnership with the university’s Disability Advisory Service and Student Union’s Disability Campaign (DisCam), accessible activity will continually expand and develop in line with new requests from clubs and students alike, so if there is a sporting opportunity that you want to take part in you are very welcome to initiate that request.

Below are some case students of how sports clubs have developed their accessible offer and how to get involved:

Para-Archery is a variant of archery with many similarities to its able-bodied counterpart. Para-Archery is open to athletes with physical impairments who may shoot with assistive devices allowed under classification rules.

Para-Archery sessions are organised within the Oxford University Company of Archers Club programme. There is a beginners course as well as the Sunday Experienced sessions which are both led by coaches. Students, staff and local community members with-or-without physical-or-intellectual impairments are able to attend these sessions.

Become a member of the Oxford University Company of Archers Club to attend sessions.

Bows and arrows are provided.

Para-Athletics rules are largely the same as those for able-bodied competitions, with competitions classified by disability depending on the discipline in either Track (T) or Field (F).

Suitable outdoor clothing should be worn.

Wheelchair Basketball is basketball played by individuals with varying physical disabilities that restricts from playing the running game.

Sports wheelchairs and basketballs are provided.

Blind (or Visually Impaired) Ice Hockey facilitates athletes with visual impairments. A steel puck with ball-bearings inside is used, allowing players to locate it by sound. 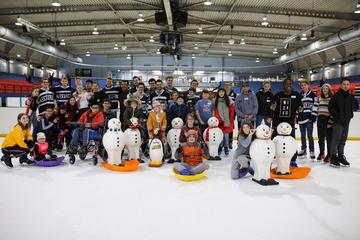 Oxford University Ice Hockey Club’s development squad are welcoming to any visually impaired skater who would like to train with them.

"Hi, I’m Miles, I’m 20, I study Maths at Oxford and I’m visually impaired. I started Judo at the beginning of university. I had never done anything like it, I had no martial arts experience but it was something I thought it looked interesting. At the fresher fair I met one of the coaches and asked him if Judo was suitable for someone visually impaired, he said that it was the best sport for someone like me and I’d be very welcome to join the beginners’ course. 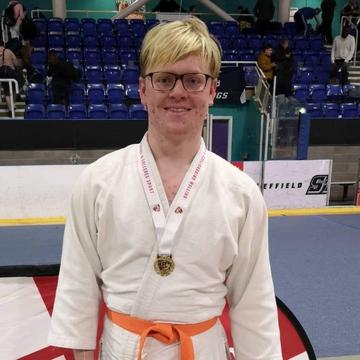 "Over my first term at university Judo’s weekly sessions were the highlight of my week. I’d thoroughly enjoyed myself. At end of the course we did our first grading, once we passed we all became yellow belts.

"At the start of second term there were many more sessions I could attend each week, I welcomed the opportunity to train more. I was asked if I wanted to compete in the British university champions (BUCS) I said of course. Happily, the event was being held in my hometown Sheffield so my family could watch.

"I went into the event not expecting much. I’d just become an orange belt 4 days earlier which is the minimum grade to compete in the event so I wasn’t hopeful. This was until I had a conversation with my coach where he said that the most important aspect of a fight is confidence. The guy in front of you is just the next guy you’re going to beat. This really got me in the right mind set before the match.

"The first fight came and went, I’d won my first fight! I was amazed. My coach patted me on the back and said one down two to go. The next fight only lasted 4 seconds. As I walked off, I was told I was in the final. I asked my coach what happens if I lose, he said there is no point thinking about that, it’s not going to happen. He was right. I won. I had won a gold medal in my first competition in my hometown in front of my parents. This was when I fell in love with Judo. 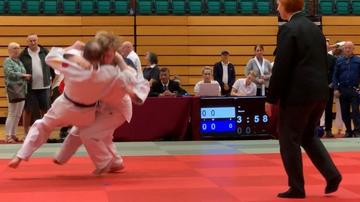 "The following week I competed in the Oxford-Cambridge varsity match. I managed to win this also. Later I found out that the whole Cambridge team had been practicing visually impaired rules to try and counter me, their efforts were fruitless.

"On the day I was terrified, there were people who’d travelled from across the world to compete here. After all my fights were over, I’d won. I became the British visually impaired champion with my longest fight being 6 seconds.

"It’s been the best year of my life and I can’t believe all the fun I’ve had due to Judo."

Para-Swimming rules are largely the same as those for able-bodied competitions, with competitors classified on physical, visual or intellectual impaired functional ability to perform each of the swimming strokes.

Para-Swim sessions are organised within the Oxford University Swimming Club programme with sessions led by members of the club or coaches. Para-swimmers train alongside the blues and seconds squads with additional para-swimmers lane time available as well, the training schedule will depend on what works best for the individual. 2020 saw the first para events at the Swimming Varsity match and the club has had para-swimmers compete on the team at BUCS.

Students with-or-without physical-or-intellectual impairments are able to attend these sessions.

Suitable swimming clothing should be worn.

To help support special initiatives such as the accessible sport programme we would ask you to please consider making a donation. Gifts of all sizes make a huge difference, thank you.